Today on Illustration Showcase I am featuring the artwork from Trudie Skies latest novel: The Thirteenth Hour.

Cruel gods rule the steam-powered city of Chime, demanding worship and tribute from their mortal subjects. Kayl lost her faith in them long ago, and now seeks to protect vulnerable and downtrodden mortals from their gods’ whims. But when Kayl discovers powers that she didn’t know she had—and destroys a mortal’s soul by accident—she becomes Chime’s most wanted.

Quen’s job was to pursue sinners, until the visions started. Haunted by foreboding images of his beloved city’s destruction, Quen hunts soul-sucking creatures made of aether who prey on its citizens—and Kayl is his number one target.

To ensure Chime’s future, Kayl and Quen must discover the truth of Kayl’s divine abilities before the gods take matters into their own hands.

For a city that bows to cruel gods, it’ll take godless heathens to save it.

Over to you, Trudie:

From left to right, these are the two main characters of The Thirteenth Hour and the organisation which calls itself the Godless.

The Godless are a shadowy organisation who seek to protect mortals from their god’s whims. They commit the unforgivable sins of apostasy and blasphemy and oppose the Wardens, the police force of Chime who serve the gods. 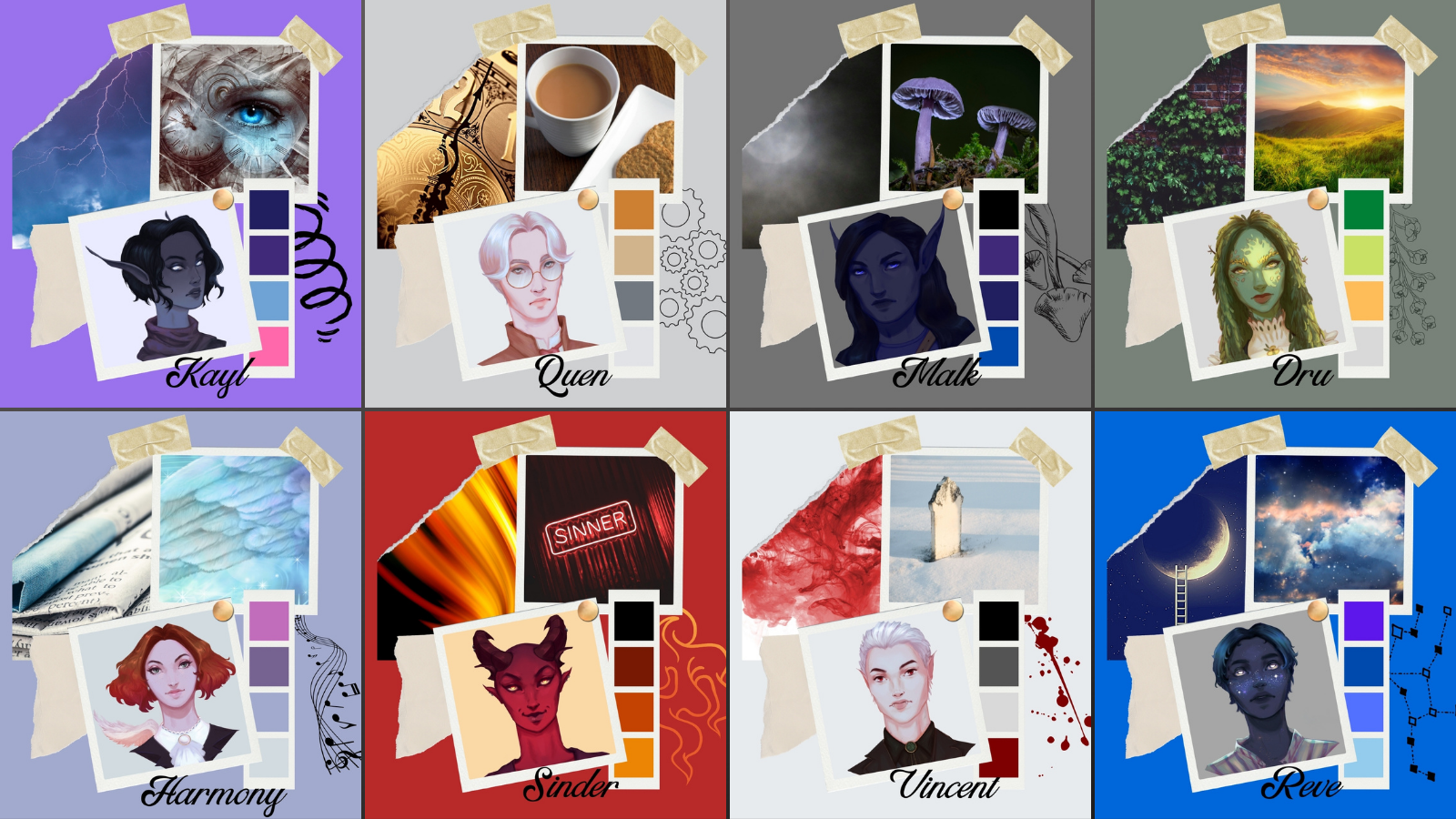 Kayl is the primary main character for The Thirteenth Hour. She’s a Vesper and has the power to summon and manipulate shadows, though at the start of the story she discovers powers she didn’t know she had – the ability to take on the appearance and powers of other domains through touch! Kayl is a playful character who serves the Godless as a spy.

Quen is the secondary main character and works as a Warden in opposition to the Godless. He’s a Diviner, which allows him to manipulate time. He can also view the past and future of those he touches, which includes the exact moment of their death. He’s been experiencing visions of Chime’s future destruction.

Malk is another Vesper and member of the Godless, and Kayl’s longterm boyfriend. He’s the fighter of the team and handy in a knife fight. He grew up on Eventide and watched his father die because he couldn’t make a tithe to their god.

Dru is an Umber, and Kayl’s best friend. As an Umber, she is made of literal stone with vines for her hair and flowers that sprout from her brow. She has a natural talent for gardening and helps grow fruit and veg for the Godless. She also acts as a caregiver for Reve.

Harmony is a Seren, a small 4-foot Cherub-like race, though unlike the rest of her race, she only possesses one wing as her other wing was ripped off by her god. At 40, Harmony is the oldest of the Godless and also their leader. She works at the Chime Courier newspaper office by day which is where they get their intel.

Sinder is an Ember with the power to manipulate and summon flame. Covered in piercings and tattoos, Sinder likes to dress in feminine clothing such as corsets. He spent years trapped inside a workhouse and still has PTSD from that time. His role with the Godless is to spy and use his fire power when needed. He’s in a relationship with Vincent.

Vincent is a Necro, who are vampire-like in appearance with the ability to physically manipulate bodies, including healing them or tailoring their appearance. However, this ability comes with a hunger for human flesh and blood. Vincent is the healer of the Godless.

Reve is a young Mesmer boy who receives visions which help the Godless plan their next moves. When not acting as the Godless seer, Reve spends much of his time sleeping, though he suffers from nightmares.

Bonus character not included above: 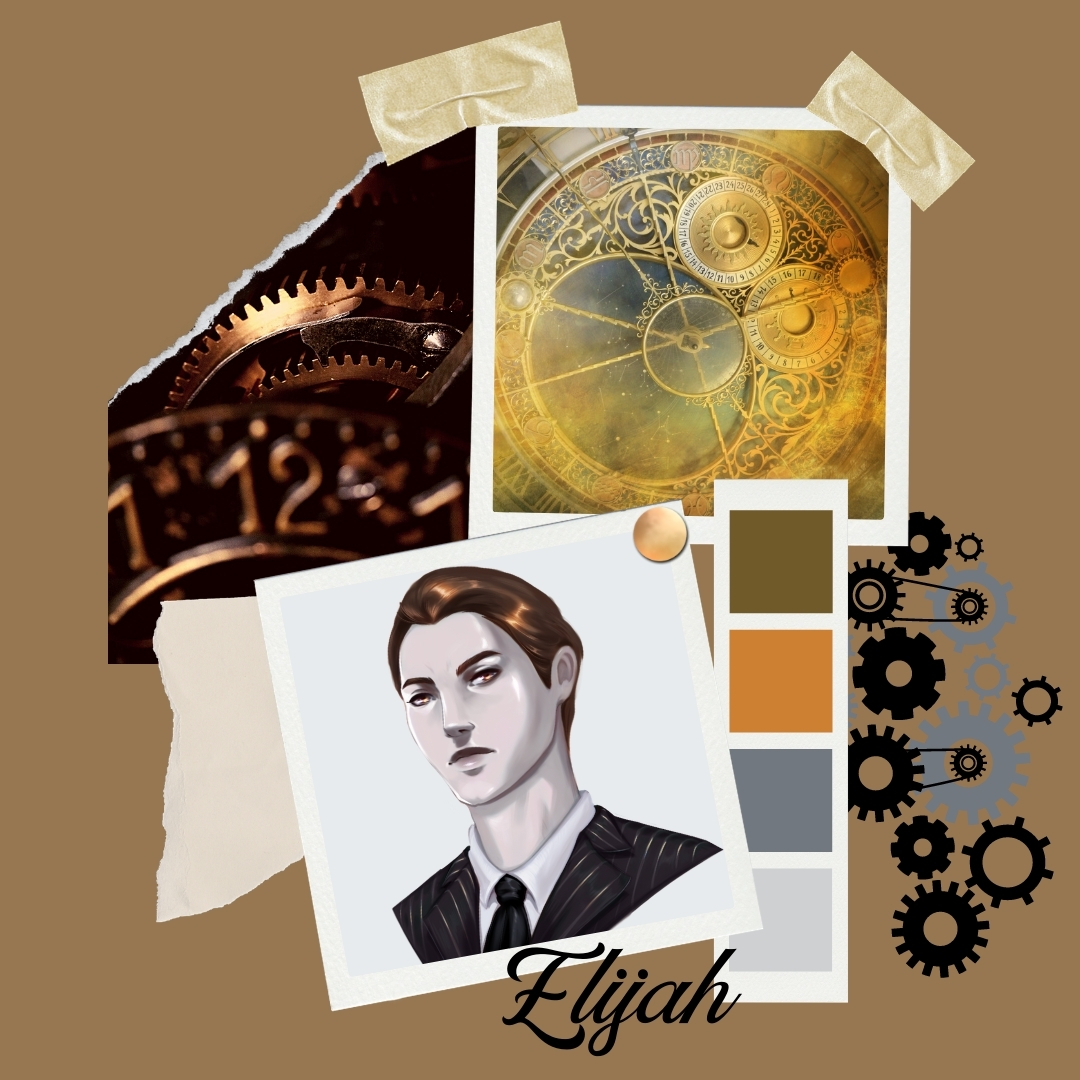 Elijah is another Diviner. In fact, he’s their ambassador and Quen’s direct superior. He’s also the main antagonist for The Thirteenth Hour. Though he can also manipulate time, his main ability lies in bureaucracy (and being an asshole!)

These character designs were created by Seraphim:

Bio: Hi there! I’m Seraphim, a digital artist, I work primarily on character illustration in a stylized semi-realism art style. My passion is bringing characters to life and highlighting the features that make them special and unique. My main inspiration comes from fantasy worlds, as I believe it allows a lot of freedom in the creation of characters such as their appearance, story, personality and more. On the side, I do environmental art to create mystical worlds that serve as a home to these characters.

On my website I have a list of all twelve domains and their races which includes all of the character art I have as well as banners I designed that represent those domains.

You can find those here: https://trudieskies.com/domains/

The domains are also represented on the map!

This beautiful map of the twelve domains is part-map, part-timetable! Each section of the map corresponds to a specific domain which can only be entered at its designated time once per twelve hours.

In the city of Chime, a large portal known as the Gate stands in the center of Central Station. Through this portal, mortals can enter the domains of the gods, or travel from those domains into Chime. The portal changes at the turn of the hour, cycling through each domain in turn. Want to head to the casinos of Rapture? Then you’ll need to wait until either 9am or 9pm to make the crossing. Miss your crossing? Then you’ll have to wait twelve hours for the next!

Chime itself is a steam-powered city made from brick and brass that is shaped like an hourglass. A giant clock tower sits on top of the Gate and connects the upper Golden City to Central Station, and to the Undercity below via large steam-powered elevators. Chime is a melting pot of the twelve domains and the various mortals learn to coexist. It’s ruled by the Wardens, a police force who act in the gods’ name to keep the twelve races pious.

The amazing map was created by Soraya Cocoran: 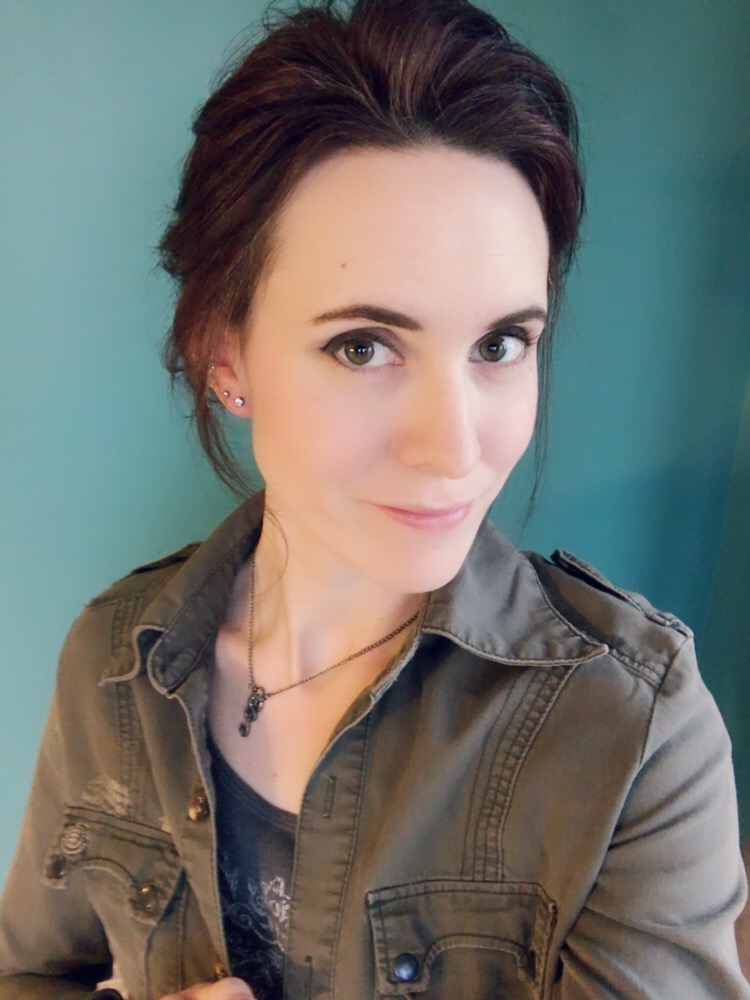 These are quotes from The Thirteenth Hour that I designed using Canva:

Quoted by Kayl as she reflects on the city’s potential. The gods cannot enter Chime and directly influence the city, which means the mortals of the twelve domains have some freedom away from their gods’ whims. However, the Wardens still rule Chime in the gods’ name, so it will never truly be a godless city, as the Godless want.

Quoted by Kayl at the end of chapter one. As a member of the Godless, Kayl knows never to pray to her god, because to pray attracts the attention of one’s god, as though shouting in their ear, and the last thing a Godless mortal wants is to attract their god’s attention. Instead, as a Godless woman, she holds her own fate in her hands. 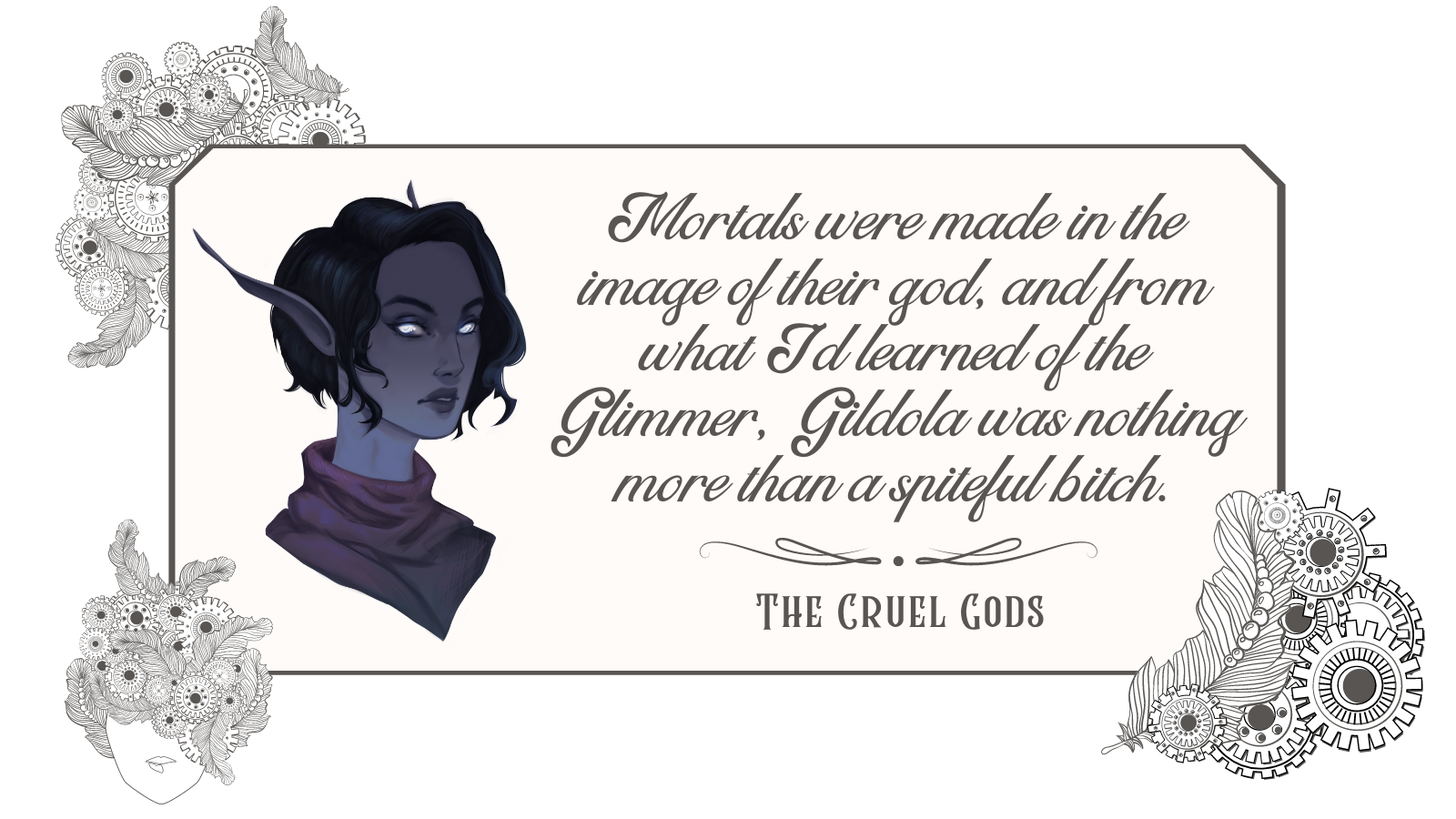 Quoted by Quen when reflecting on the slums where the poorest of Chime’s citizens live. Many enter Chime thinking it is a perfect city without realising it has its own problems, poverty being one of them. 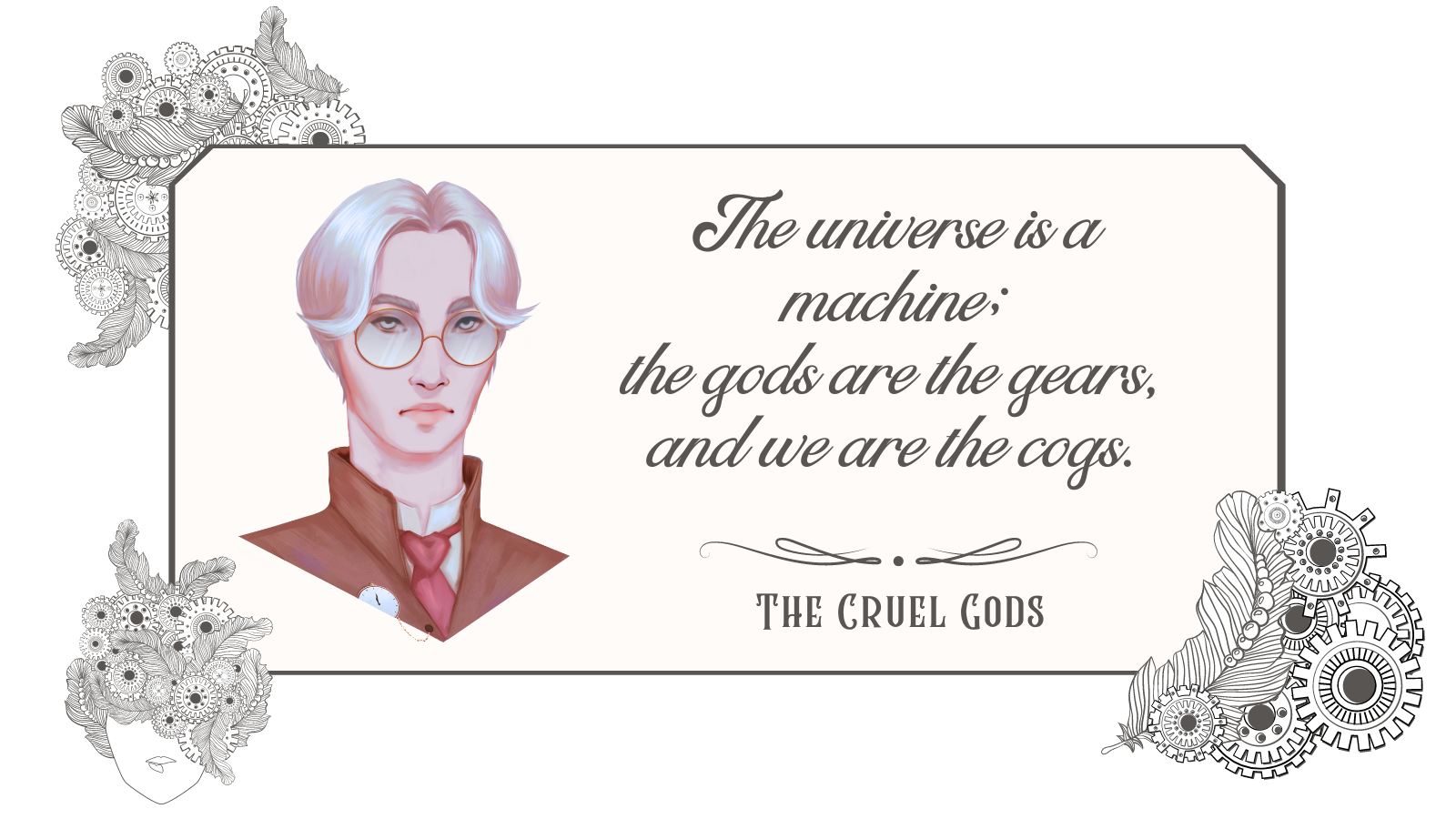 Quen quoting Diviner philosophy. The Diviner are uniquely attuned to time, and they see themselves as a stoic people where they exist as part of a grand machine to serve their god and to serve Chime. 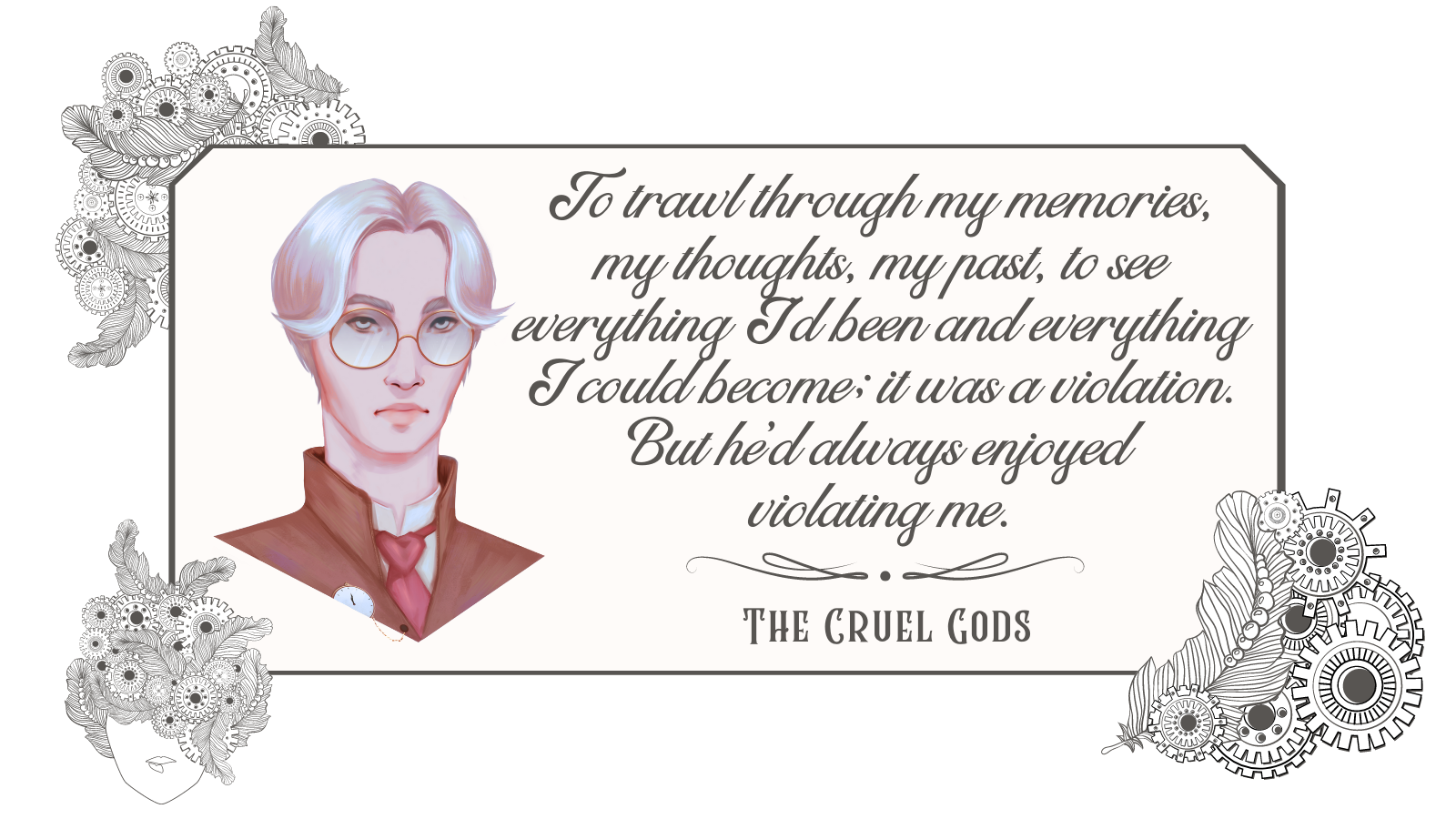 Quoted by Quen in chapter three. Here he is reflecting on his relationship with Elijah. As a Diviner, Elijah can sift through the memories of mortals he touches, and as he is Quen’s superior, he demands to check Quen’s memories regularly to keep track of his Warden activity, and also to assert his power and authority over Quen.

Some other aesthetics and images I have! These were all created using Canva. 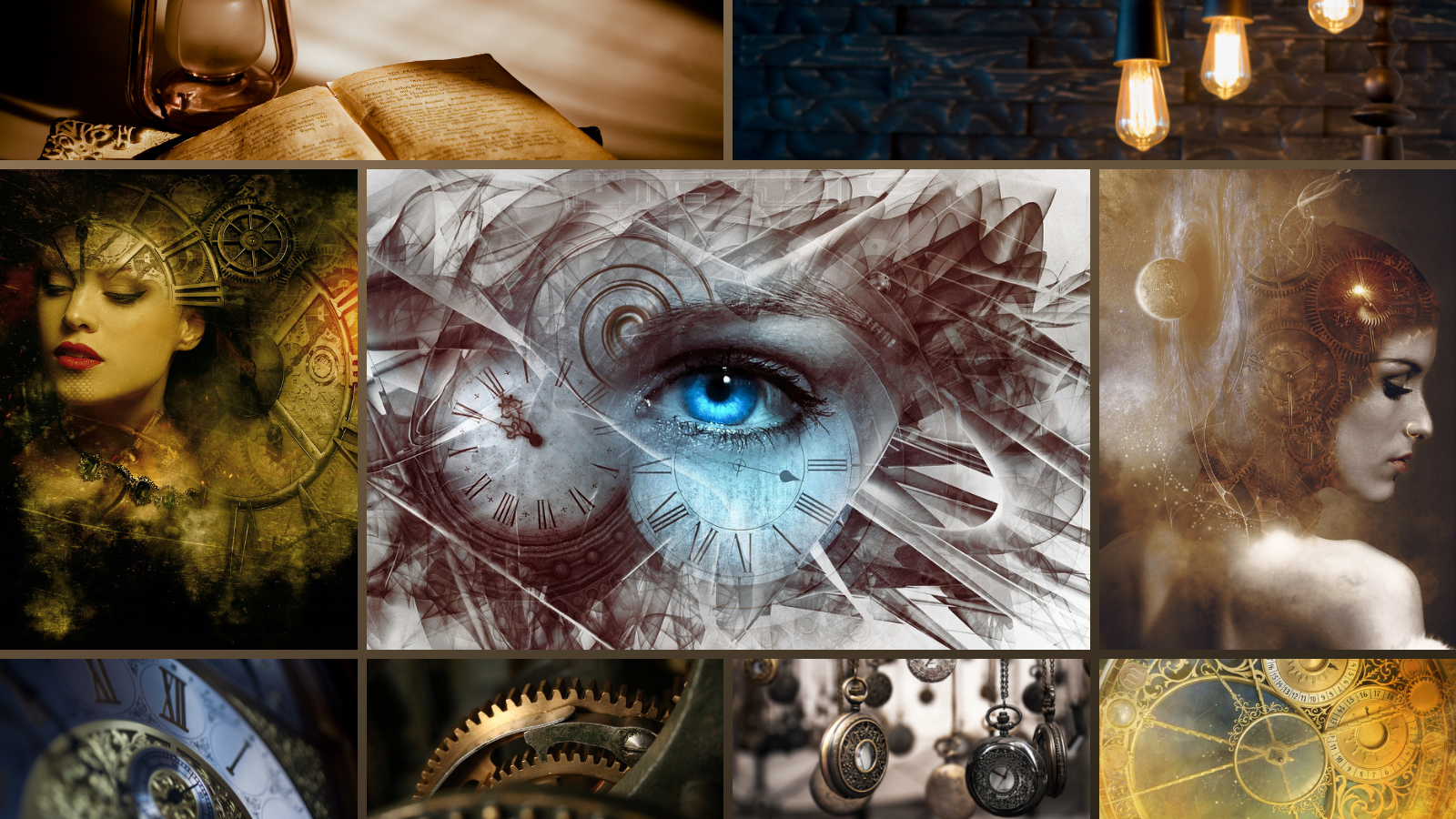 An aesthetic capturing the feel of The Thirteenth Hour, specifically the main character of Kayl and her secret twin sister (!!) – the blue eye also represents Kayl. 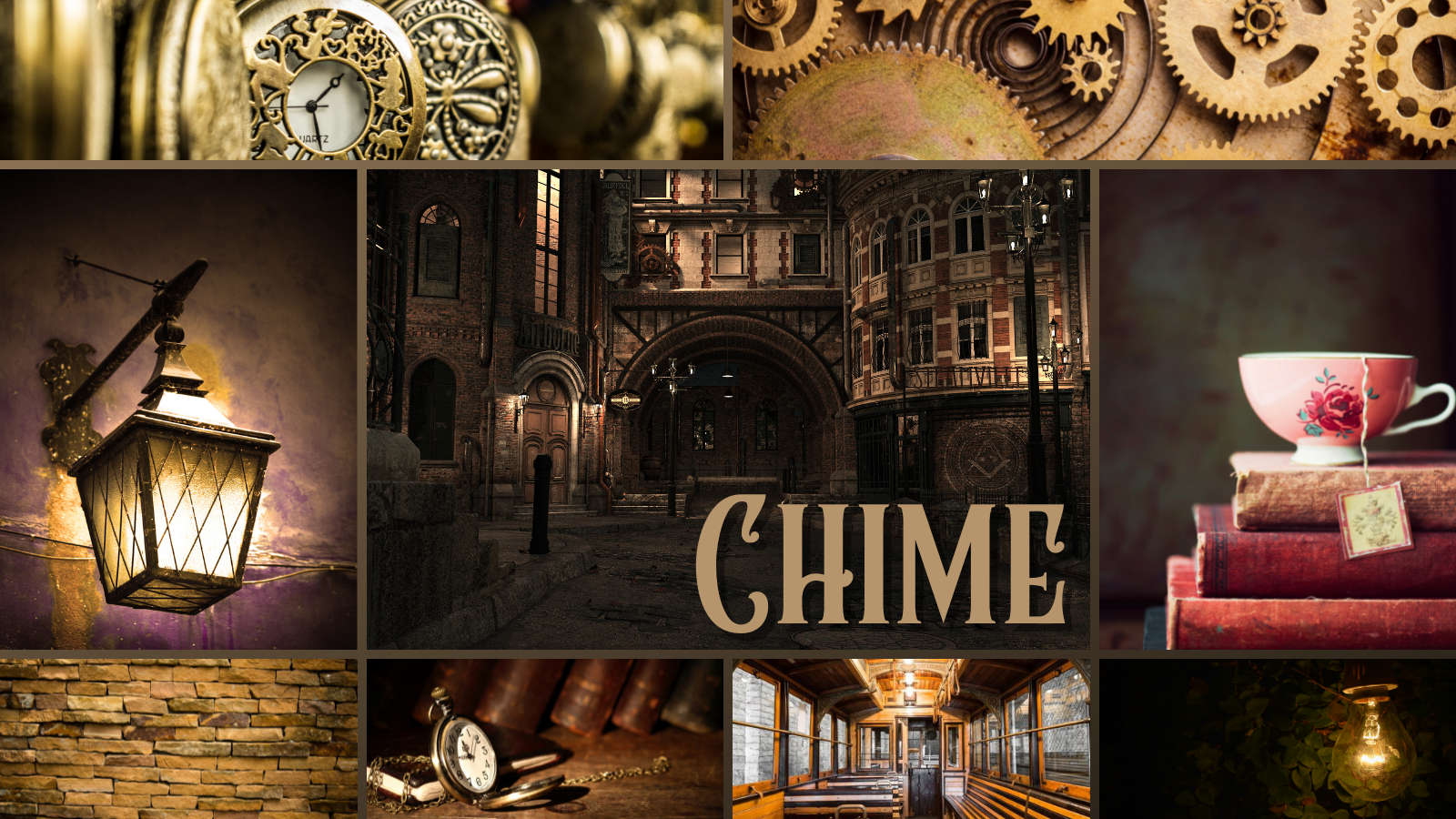 An aesthetic capturing the mood of the city of Chime. 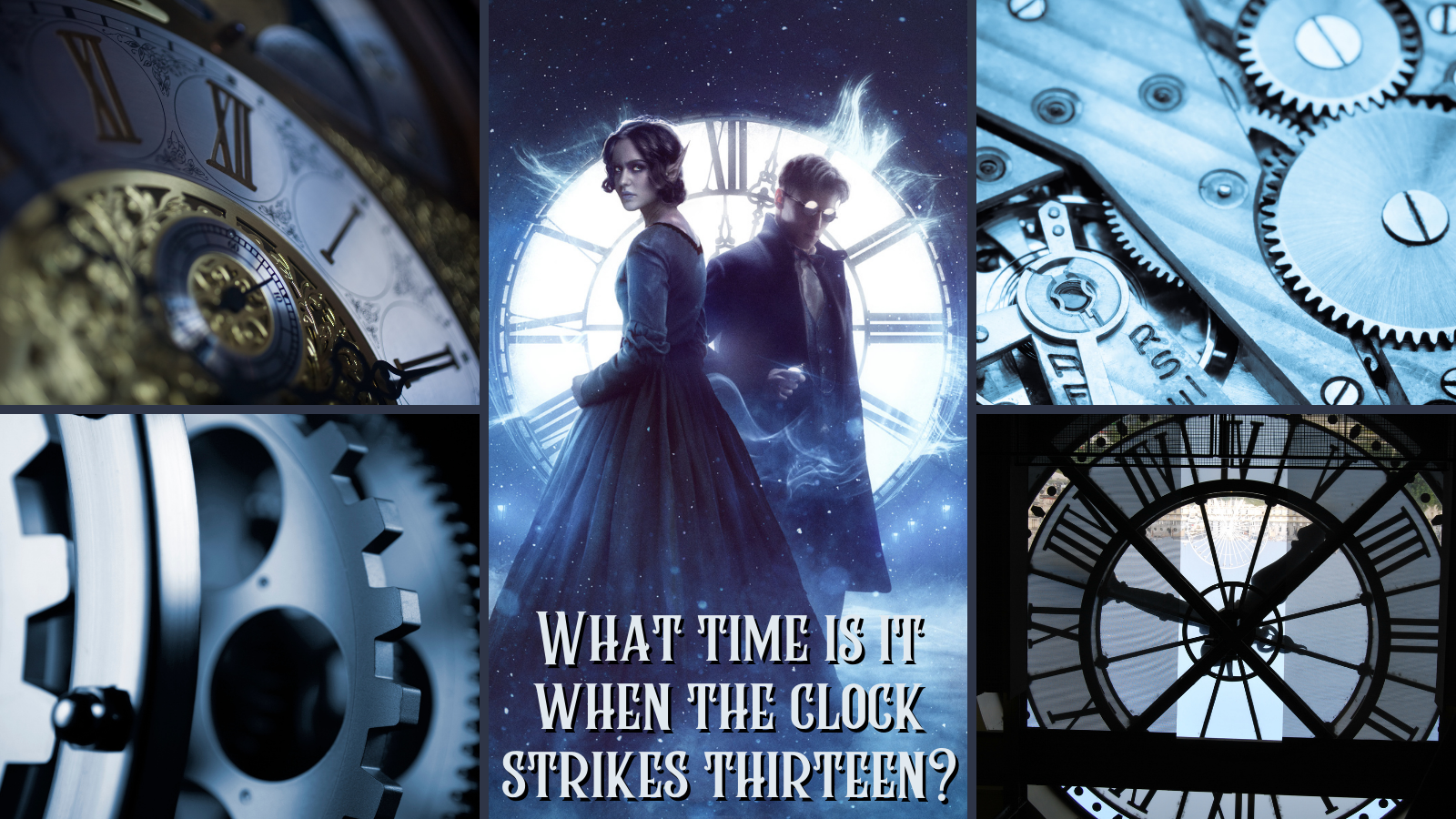 An aesthetic about clocks! Time is important in The Thirteenth Hour, as you may have guessed from the name. The number thirteen is repeated throughout the story. The clocktower of Chime is also an important location. 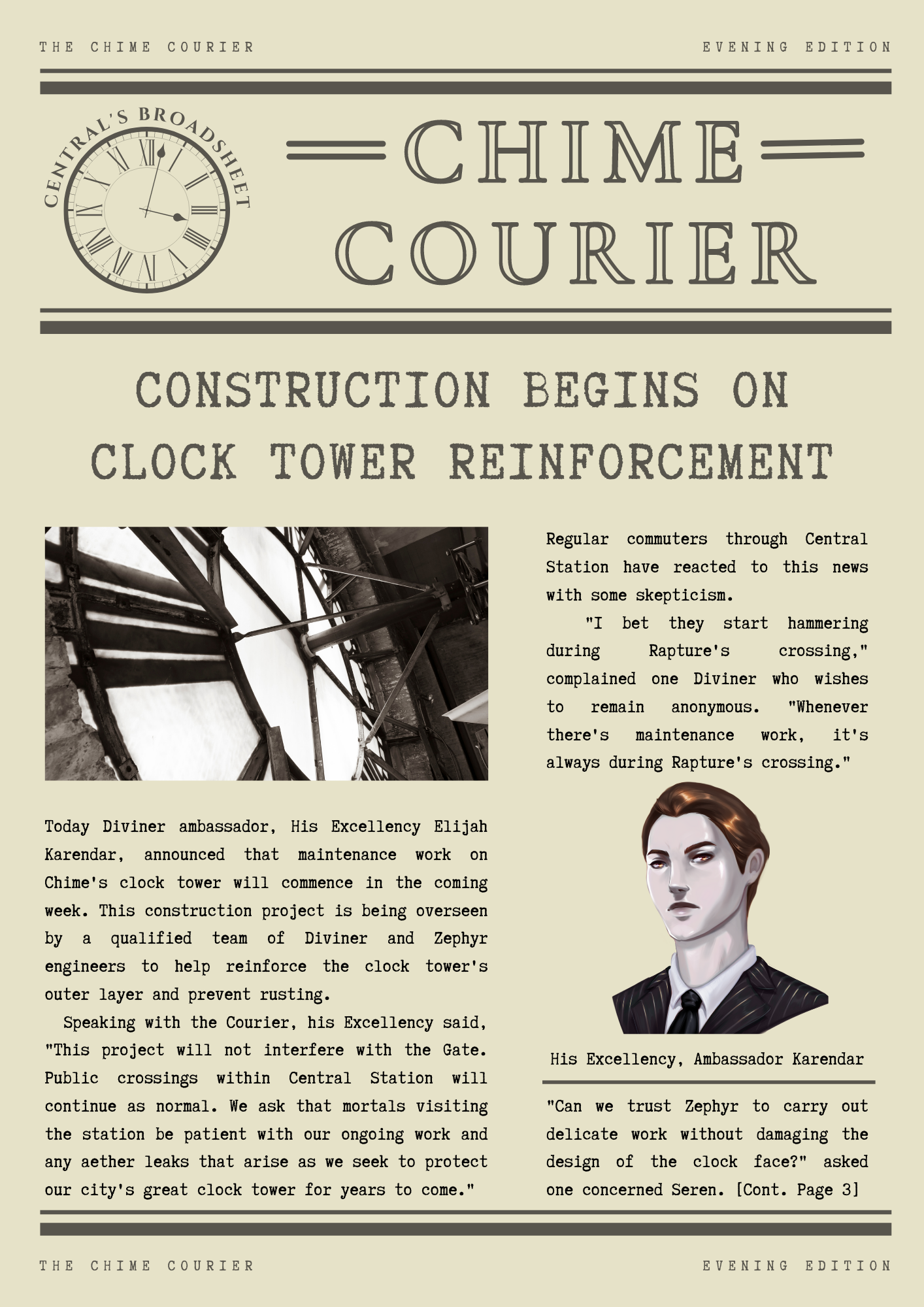 A fake newspaper headline for the Chime Courier, Chime’s newspaper which gets quoted throughout The Thirteenth Hour. The actual headline is also quoted a few times and is relevant to the story!

Trudie Skies has been living inside fantasy worlds ever since she discovered that reality doesn’t quite live up to the hype. Through the magic of books, she wishes to share these worlds of hope and heroes with other weary souls. Living in North East England, Trudie spends most of her free time daydreaming about clouds, devouring whatever fantasy books or video games she can get her hands on, and chasing after her troublesome dogs, who would like to reassure you they are very good boys.

Her debut YA fantasy series, Sand Dancer, was published through Uproar Books. Trudie is now writing adult gaslamp fantasy with her new series, The Cruel Gods.

One thought on “Illustration Showcase – The Thirteenth Hour by Trudie Skies”